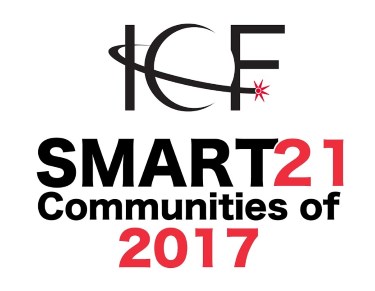 For the second straight year in 2017, Sarnia-Lambton was named one of the world’s Smart21 communities.

The designation is awarded by the Intelligent Community Forum, a global network of cities and regions whose mission is to help communities use information and communications technology to create inclusive prosperity, tackle social and governance challenges, and enrich their quality of life.

Sarnia-Lambton was selected from a pool of nearly 400 submissions and competed in the Smart21 phase of the competition against six other communities from Canada, five from Taiwan, four from Australia, and one each from Kazakhstan, New Zealand, Russia, the United Kingdom, and the United States, ultimately finishing outside of ICF’s Top7 designation.

Sarnia-Lambton is competing again for Top7 designation in 2018.